The Stairway Method of Industry Analysis

The Stairway Method of Industry Analysis

I have an oddball method for assessing the health and future of a company – the stairway method.

I’m constantly asked to assess not only the overall Business Intelligence/Data Warehouse market, but also specific companies. This means that I have to invest a lot of time doing due diligence to provide as educated a guess (and foretelling the future is always a guess) as possible.

Like anyone following an industry, for the most part I turn to the usual methods. My experience with a company and its products, along with talking with my peers, industry analysts and various vendors’ customers yields a lot of great anecdotal evidence. I also read and discuss evaluations by industry analysts and experts. Industry analysts’ “positioning” charts that compare vendors in an unbiased (although vendors don’t always think so) fashion help me with high-level assessments.

In addition, my due diligence includes checking out company and market financials such as stock performance, revenue, earnings and other key performance indicators (KPIs). In fact, several financial analysts regularly contact me during their channel checking inquiries before they update their market and company financial reviews. It’s a good chance to swap information and gossip.

So far these are all pretty standard due diligence approaches. But in the financial community many analysts have “out-of-the-box” (a more politically correct way to phrase oddball) methods to determine market or company performance. So have I: the stairway method.

I was reminded of my oddball method recently when running by a few corporate headquarters on my noon jog. My method: you can learn a lot about a company by looking at the size of the stairways in its headquarters. 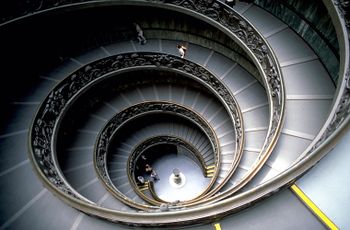 OK, I admit this may seem weird. But honestly, I have observed over the years that the size of the stairways is generally more reliable than industry pundits and often provides as much insight into a company’s future as financial or industry analysts’ opinions.

Why are stairways a solid predictor of a company’s future? If the founders think they are going to grow substantially then they build their headquarters with an abundance of wide, well-lit stairways. If you invest in your stairways, especially since no one will really see them, then you must be thinking you are growing. On the other hand, if the firm is cash constrained when it builds its headquarters, it is likely to skimp on the stairways. After all, not everyone sees the stairways, so it’s a natural place to save money.

If you’re not laughing too hard to try the stairway method for yourself, note that it doesn’t matter if the headquarters is lavish or plain. The current decor may be more of a reflection on the current management or founders’ taste than a financial performance indicator. There were plenty of Internet companies that never made any money, but spent lavishly and were doomed to fail. (If I only realized that before the NASDAQ bust!) Even now, there are many firms that want to show off — whether they are actually wealthy or not. On the other hand, there are also many “New England Puritan” firms with strong balance sheets yet plain headquarters.

The stairway indicator analytical approach came to me from my days at Digital Equipment Corporation (DEC), which was bought by Compaq and then HP. The company’s founder, Ken Olsen, was a classic New England frugal engineer — never flashy. Later he was replaced by Bob Palmer, who was quite the opposite. (Palmer soon sold DEC to Compaq.)

After he took over the helm and the company’s decline accelerated, Palmer moved the company headquarters from the old mill to a brand-new building a mile away. Those of us who worked in the same building noticed his flashy car in the parking lot. Even the media took note of his Armani suits and perfectly coiffed hair.

What was most telling, however, was that while the new headquarters building might have been flashier on the façade, the stairways inside were smaller, cramped and less abundant than those in the old mill.

I have since noticed this phenomenon in many of my clients’ headquarters, in various industries — financial services, insurance, retail, consumer products goods, health care providers, manufacturing and other high tech firms. I have also observed it at software and hardware vendors.

The next time you’re wondering whether to make that investment or take that job, remember that stairways foretell the future of a company…or at least they foretell it as well as an analyst’s chart or an industry expert’s opinion.

PS: The Vatican’s stairway pictured above certainly foretold a long and prosperous future. I have not yet been in any corporate headquarters with a stairway this extravagant!